The objectives of the visit were to see kitchen facilities and equipment, discuss menus with school cooks and challenges currently faced with school meal provision. Every school complained about the complexities of the current public sector procurement Law, and the difficulties this leads to regarding the quality of food that schools can buy. School directors and cooks know that the requirement to accept the lowest bid leads to poor quality food, that is not fresh and which can lead to large quantities of waste – 50% of potatoes lost through damage, fresh meat being rejected because of suspicious appearance and smell, and so on. Part of this high level of food spoilage is likely to be because deliveries are not as frequent as they should be in some schools – the contract required a delivery every day, but because it was not economic for the supplier to do this, it was delivering foods only twice a week. 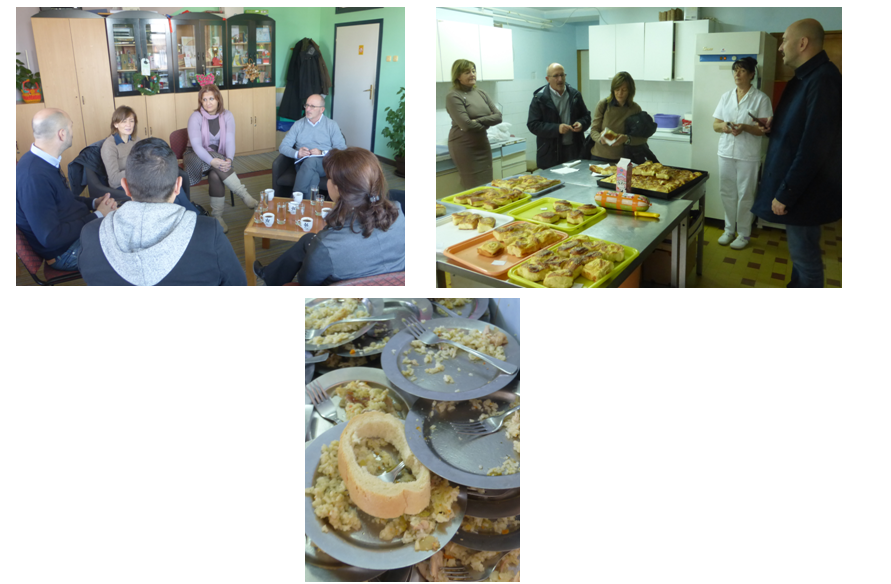 Schools were enthusiastic to discuss opportunities of improving menus with the BARILLA colleagues, and looked forward to having advice on making their meals more attractive to the children, not only to help improve their nutritional qualities, but to reduce plate waste.

At one school, the BARILLA visitors saw mountains of bread being consumed (just the soft spongy white centre, leaving the crust behind) in preference to the main course, which leads to poorly-balanced food consumption, as well as being a waste of the parents’ money on the children’s school meals.

School meals in the Novi Sad schools benefit from regular nutritional analyses by the Vojvodina (provincial) Institute of Public Health, and we were shown examples of nutritional analyses and recommendations on how to improve the balance between protein, carbohydrates and fats. Such analyses were not being carried out for the schools we visited in Belgrade and Mionica.

Over the next few months, the BARILLA team will prepare suggestions for school meal menus that should be not only more attractive to the children, but more nutritious and, importantly for the kitchen staff, quicker to prepare, without being more expensive. They think it can be done!